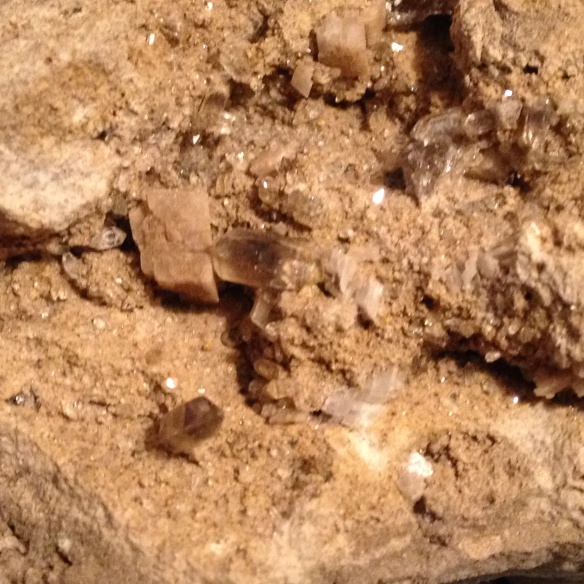 Took a break from everything else in the whole damn world yesterday to go mining. We live in Herkimer County, New York, which is famous for a special sort of quartz crystal commonly referred to as a “Herkimer Diamond.” Naturally, it ain’t a diamond, but it’s normally a clear, double-terminated crystal, meaning it has what looks like faceted points on either end, giving it a diamond-like appearance, especially for the shorter, stubbier stones.

I’ve been quartz mining in Arkansas (Mt. Ida), and I’m here to tell you that mining for Herkimer Diamonds is a bit different. While both sorts of mining open to the public usually  involve working the leftovers from commercial mines, in Arkansas the matrix is rather loose and easy to dig through with no more than a screwdriver. If you want a Herkimer Diamond, otoh, you’re most likely going to be breaking rocks. They grow in pockets within the stone, and the larger the pocket, the larger the crystals. Lacking the equipment to dig into the side of the mountain, you’ll probably be sorting through the rocks knocked loose when the heavy mining equipment moved through. You look for a rock with a visible pockets on the surface, or obvious quartz veins, you put this rock on a bigger rock, take a 3-5 pound hammer, and break the rock. If you can. If you’ve picked a good rock, it will open for you, and if you’re lucky, there’s a pocket with crystals growing inside.

Our best find of the day was one such. Only a few centimeters long, but beautiful. Carol found the rock, I broke it, there was one fat little crystal within. The one pictured is a rarer find from a rock already broken by the machines, with several growing and visible, in among squarish crystals of dolomite. I decided to leave them in place, and just keep the rock. It’s sitting on my desk.

I think it’s saying “Get Back to Work, Slacker.”