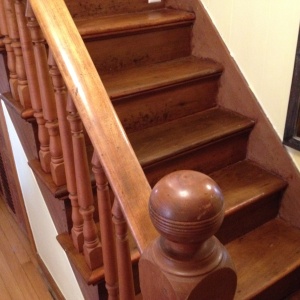 Our “new” house was built in 1900, so naturally it has a few quirks. Some of those are of the “just the way it is” variety, and you learn to appreciate them because they’re not changing. Others require modification, like a replacement window or installing a vent to bring a bathroom up to code. The usual things. In a house this old, a lot has changed of necessity over the years, but I’ve recently had reason to notice one thing that has not–the staircase. It is all original.

Three things brought this to our attention, other than its obvious age and patina. The first was when Carol noted that the spindles on the banister were not all exactly the same shape, as they would have been with CNC machine-cut spindles. These were done individually on a lathe by hand. Then I noticed a faint but distinct pattern of radial lines on top of the banister that ran the length of the rail, and realized they were the trails left by planing where the curve of the railing had been shaped by hand. The third confirmation came when I was coming down the stairs in my sock feet and slipped, knocking a couple of the spindles loose from the tread as I slid down the stairs on my butt. Fortunately there was no permanent damage either to me or the stairs, but now I could see that the spindles ended in hand-cut dovetails that fit into the side of the step and were held in place with a mitered cap fastened with square–not drawn wire–nails. This was something the homeowner was never supposed to see, that construction beneath the surface that just does its job, has to be done right, but by design will never show.

Which reminded me–and you just knew I was going there, didn’t you?–of something similar in the act of writing, in that a lot of what makes a piece of writing work is usually below the surface, doing its job but not, by design, drawing attention to itself. Even though the Yamada books are pure fantasy, they are set in a specific time and place that is well-documented. Many if not most of the people who come on stage or get mentioned in the books were real people, holding the positions I said they did, sometimes even doing the things I attribute to them. Not always, but often enough. So why is that important? Simple–it helps me anchor the narrative to the time and place where the events are set. It sometimes even suggests events that fit the narrative and give it direction.

For instance, in the late Heian  period the mighty Fujiwara Clan is losing its influence over the court of the Emperor for a lot of reasons, not the least of which is the rising power of the warrior clans (foreshadowing the later samurai class). At this point in history the two clan leaders, Yorimichi and Norimichi, get into a feud which prevented them from acting together effectively to curb the rise of the Emperor’s faction opposing them. Family squabbles happen all the time, but this one occurred just when the reigning Emperor was in a position to take full advantage of it. Does the reader need to know this? Nope. But I did, because it pointed the current story toward a particular path that, in my opinion, made for a better story as well as following the actual historical timeline. It informs everything that follows in the book, like those invisible dovetails in the spindles that keep the railing on the stairs in place.

That railing has stood for over a century, despite clumsy clods in their sock feet. I took a lesson.