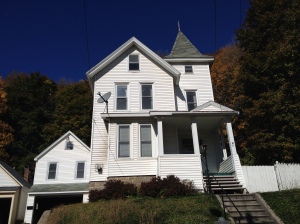 That’s the way a friend of mine described it–that in between time when you’ve arrived at your new place but the movers haven’t caught up. So we have lights and heat, thank goodness, but almost no furniture. Still living out of suitcases, eating off paper plates, and sleeping on an air mattress.

I’m typing this on a Linux laptop. It’s not my regular workstation, but the thing is, just right before the move, as in literally days before, my regular workstation decided to die, and unless I can mount a successful rescue, it took all my files with it. Backup? Of course. Problem is, I have apparently managed to lose it. I don’t know if it’s in one of the boxes on its way here or is gone forever. I do not know how I managed to do something so completely asinine as to lose a very important backup. To be fair, I actually have two, and I do know where one of them is. It’s just going to be more of a pain to restore, but it exists, so eventually everything should be back in place. My new computer is ordered and in transit. Assuming everything else arrives some time this year, maybe I can get myself back together. That would be nice, since I have a hell of a lot to do.

I hope we love it here, since I don’t plan to move ever again.

3 thoughts on “Camping With Electricity”