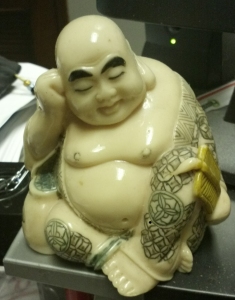 I’ve heard it stated that “no one should give writing advice unless you’ve written at least ten million words.” The number of words varies sometimes, but it’s always high. Then there are other caveats attached, such as “unless you’ve had some measure of success” or “you’re known for a type of fiction/nonfiction” or…”<insert caveat here>.”

Now and again I’ll talk about writing on this page, and frankly after thirty plus years pushing words together I have no idea how many I’ve written. It might be fewer than ten million words. It might be greater. I don’t really care, as this never had much to do with the way I kept score in the first place. I always leaned more toward “Is this story better than the last one? Is it different? Is this progress or am I treading water?” Treading water was a sign of the dreaded plateau, where you know you’re writing at the top of your game, and it’s all at least good, probably publishable…and you are not getting better. Someone, possibly Gardner Dozois, once described writing progress as a series of plateaus. If you’re lucky and work hard, you eventually break through. Perhaps a new direction. Perhaps you simply get an order of magnitude better at what you’re (to whatever degree) known for. Then comes the next plateau, and eventually you reach one where you cannot break through no matter how hard you try, or you simply do not live long enough to find the next level.

Grim? Not really. There’s a lot to be said for doing what you love at the top of your game, whatever that level happens to be. You understand that this is not the goal, but a natural result of reaching for the goal. So long as you understand the difference, you’re doing it right.

So. Was that writing advice? I maintain that it wasn’t. Almost anytime you hear a writer talking about writing, all they’re doing is laying out their own understanding at whatever stage they happen to be, or in essence, talking to themselves. Sometimes it is helpful to other people. In workshop settings, it can be extremely helpful with the right student and the right teacher. But at heart, that is all it is. If what you hear makes no sense to you, there’s a reason, and that reason is you’re not at the right place in your own progress to understand it. That is not a problem unless you turn it into one by trying to apply it as advice to a situation where it is neither appropriate nor even advice. It is a statement of understanding, and that understanding might not be yours, because we may all be in this together, but we’re together alone, and that is grim.

At least, in my current understanding.