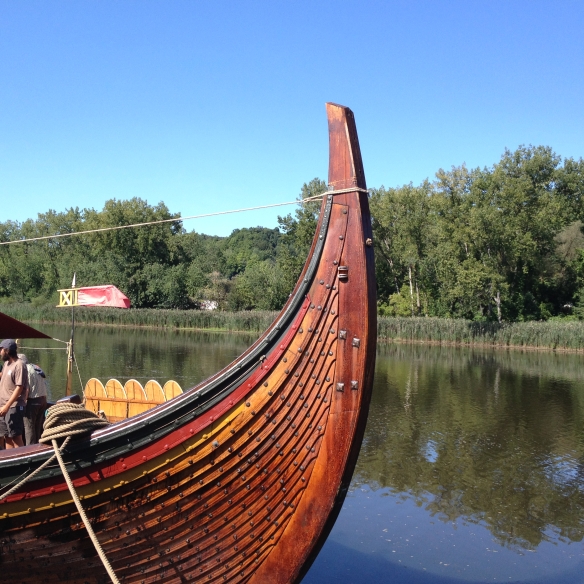 My new home town is situated in a river gorge, and both the Mohawk River and the Erie Canal pass right through it. So we were fortunate that the Draken Harald Hårfagre made it one of their stops in the their Canadian and US tour. The name translates as “Dragon Harald Fairhair.” The Draken Harald Hårfagre is the largest Viking ship built in the current age. Named in honor of King Harald Fairhair (sometimes also translated as “Prettyhair”, the dude clearly had some major locks), the first King of Norway and modeled after the Gokstad Ship. On Saturday and Sunday the ship itself was open for tours, and who with a modicum of interest in history is going to pass up the chance to stand aboard a real viking ship? It’s not like that happens every day. So we braved the crowds and headed down to the marina. 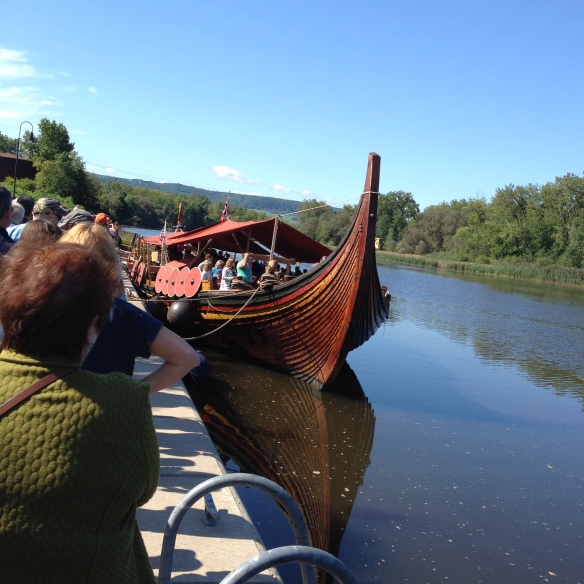 The picture above shows the prow of the ship. The dragon head had been removed during the canal navigation to keep it safe. You can see the overlapping board construction from this shot of the bow and the one above it. What’s harder to see is the v-shaped tenon cut into the top of the prow. It’s purpose will become clear once you see the picture of the dragon head itself. 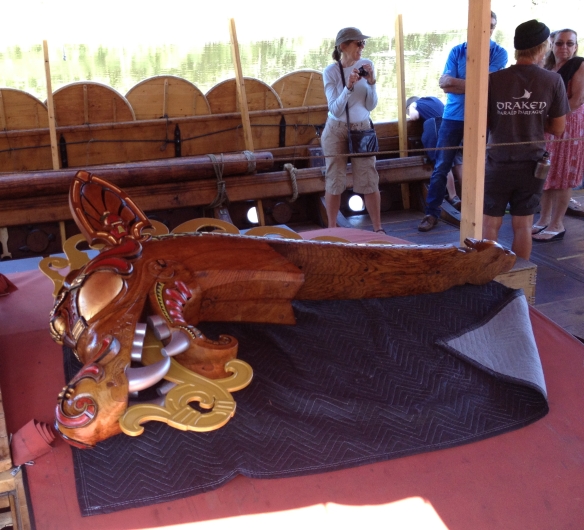 And here it is. Note the v-shaped notch you can see about mid-way down the front  of the dragon’s neck. It fits into the tenon on top of the prow, and then head is secured from the back. This is almost identical to a “crown notch” often used in the construction of log cabins. We know that the dragon heads on historical viking ships were also removable. The dragon head was only used while at sea or during a raid. If you were in your home port or visiting a friendly one, you’re not trying to scare anybody. Another area where the ship duplicates the originals is that there is elaborate carving on much of the woodwork. The Norse were known for their incredible woodcarvings (also the pillaging, I give you that). Not everything will show up in the pictures I was able to get, but the dragon head itself gives a hint. 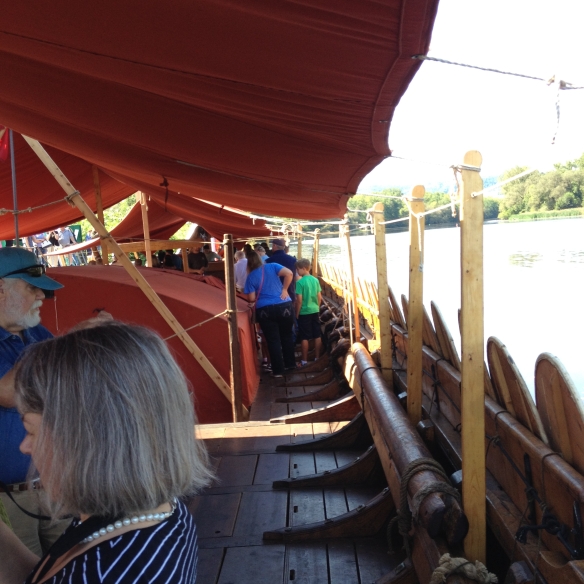 I wasn’t able to get a good shot of the entire ship because of the crowds, but this angle from just past the bow toward the stern will give you an idea of the scale. It is 115 feet long and 26ft wide, yet only draws about 8 feet for a displacement of 90-95 tons. It is capable of being rowed (25 oars to the side, fifty all together)  and has a proper sail, but a large vessel can’t sail a barge canal easily or safely so they use a modern engine for that. The reason the viking longship was such an effective raider was that it was flexible enough to travel the open ocean without being pounded apart by the waves but also had a shallow draft so it could easily travel up rivers and raid far inland. One thing that made the vikings so feared was that they could and did strike almost anywhere with no warning. 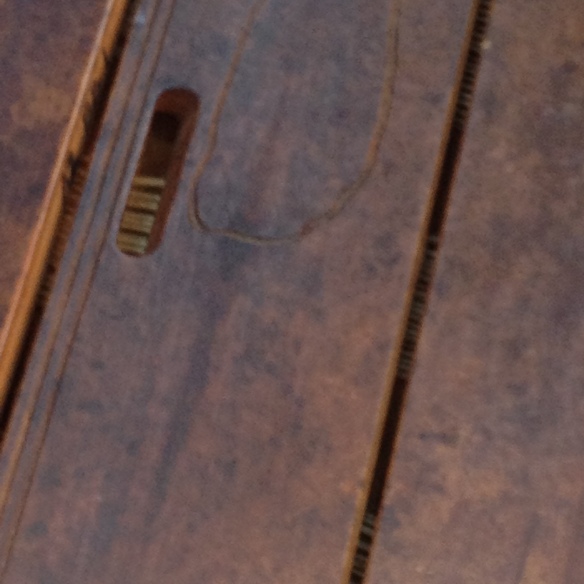 Like the originals, the Draken Harald Hårfagre is an open boat and there is no “below decks,” with one exception: they do have a modern naval “head” for the crew. Also the only place on board with any privacy. Many of the deck boards can be lifted to stow food and other gear just under the deck. Roughly amidships there is an interesting holdover from the Gokstad ship–the outline of a pair of feet carved into the  deckboards, left foot left side, right foot right side, but way too far apart for a human to stand. There are theories about why they are there, but no one knows for sure. The modern crew called them Odin’s Footprints, and the builders of the new ship reproduced them. Because. I caught part of one of them here. 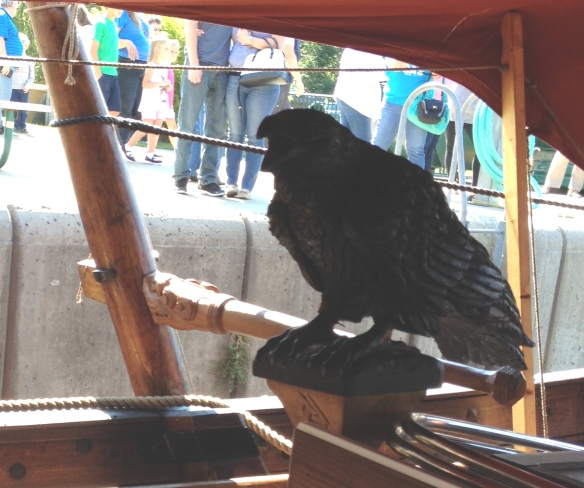 That’s a carving of Hugin (or Munin. I can’t tell them apart) to the right of the steersman’s post as you face the bow. Beyond it you can see the steering oar on the starboard side. On the other side of the steersman’s post is a carving of the other raven. Hugin and Munin (Thought and Memory) were Odin’s ravens. They would travel the world to bring him news and secrets. There’s no historical reason for them to be there, the builders just thought it would be fun. Like the dragon head, the ravens can also be removed and stored. 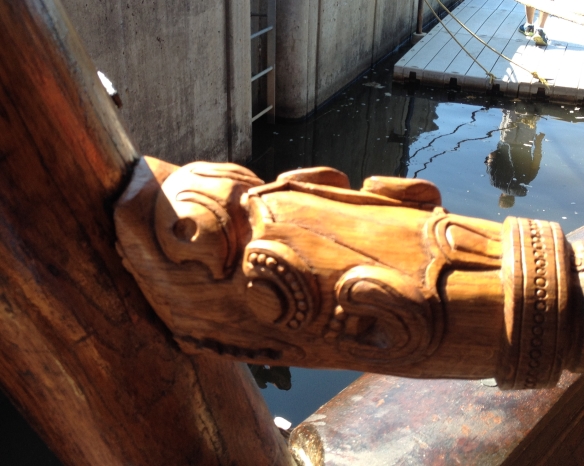 Here’s a closeup of the carving on the steersman’s oar. Just below it you can see a bit of the round hole through the top of the gunwhale that the steering oar fits into. It’s lubricated with tallow to make it easier to turn but also to protect the oar and guide hole. The gunwhales near the prow are more elaborately carved than you’ll see here, but it was hard to get a good picture of them. It was a sunny day and I was fighting light and shadow most of the time. Light and shadow usually won. 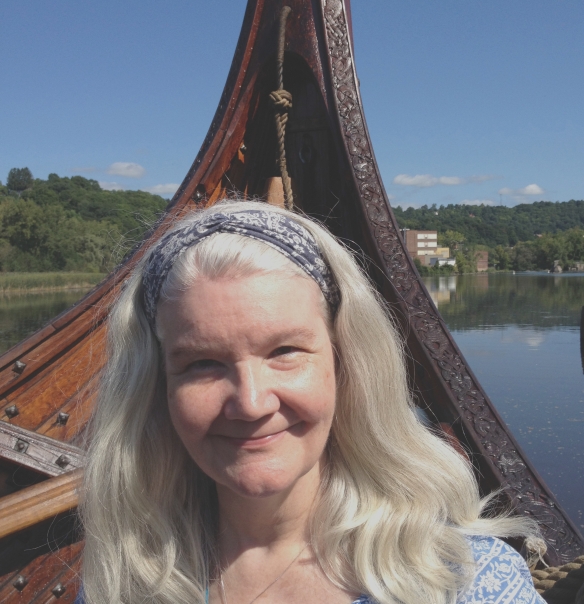 Here is a shot of  First Reader standing in the bow looking all Valkyre-ish.. You can see a hint of what the gunwhale carvings looked like to her right. 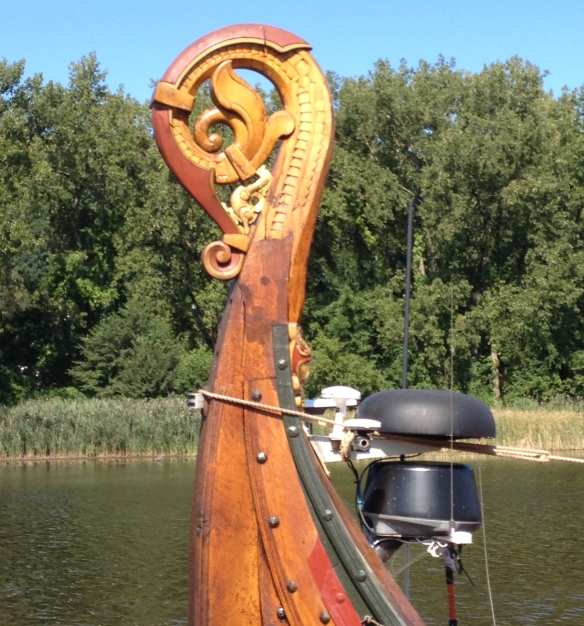 Finally, the stern. Plus a shot of the modern navigation instruments, equipment, and technology now required for any viking vessel. I think their next stop is Kingston, NY, September 9th, and then NYC on the 17th. If you’re in the area, don’t miss out.