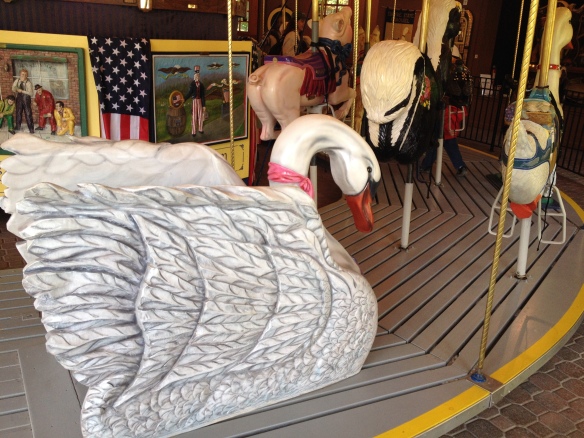 On Saturday Carol and I took a break and headed down to Cooperstown. Not, as you might have guessed, for the Baseball Hall of Fame, but rather for the Farmer’s Museum. Next trip will likely be for the James Fenimore Cooper Art Museum. We would have stopped this time but there was too much to cover and not enough day.

The Farmer’s Museum is essentially a reconstructed 19th century New York farming village, with buildings brought from their original locations and reassembled/located on site. There was the General Store, a blacksmith’s shop, a printing/newspaper office, lawyer’s office, tavern, pharmacy, etc. Carol was mostly interested in the special fiber arts demos that were taking place that weekend. There were demonstrations of carding, spinning, dyeing, weaving, quilt-making, etc.

My main interest was the Empire State Carousel. A modern construction mounted on a 1943 Herschell frame, it featured side panels of famous people from the state, most of whom I had no clue about, but the carvings were great. One of my transient passions was wood-carving, which led mt to an interest in the old carousel horses/animals, an interest which has never waned completely and one I may get to indulge a bit in my new home since the entire state was important in the old carousel industry. As a bonus, adults were allowed to ride and I hadn’t been on a carousel since Highland Park in Meridian, MS, more than (mumble) years ago. Naturally, we both jumped at the chance, though I chose to spare the jumpers (tempted, though) and just stand beside Carol, who found a seat on a beautiful swan. (Above)

And then there was the Cardiff Giant.

You’ve heard the story, right? In 1869 some workers digging a well in Cardiff, NY, found this ten foot tall “petrified man” buried in the earth. Of course it was a hoax, but a lot of people believed it. More, they paid money to see it. So the original hoaxer sold it to a consortium of men who put it on exhibition in Syracuse, Ny. P.T. Barnum wanted to buy it but they refused, so he had a fake made of the fake, then claimed that HIS fake was the original. To which one of the owners of the “real” fake said, “There’s a sucker born every minute.” So that’s where the quote actually came from, not Barnum himself. Eventually the hoaxer confessed, but it was still a while before the people who believed it stopped believing it. Or maybe they just died off.

So once people looked at this thing and thought, “This really was a person,” just as way too many people in this country now look at an ignorant, blustering bully who deliberately plays to our fears and all the worst in us and think, “He should be president.”

There really is one born every minute. 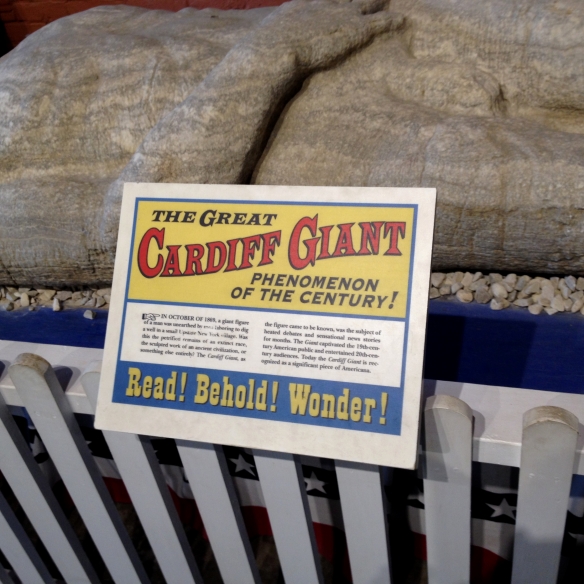