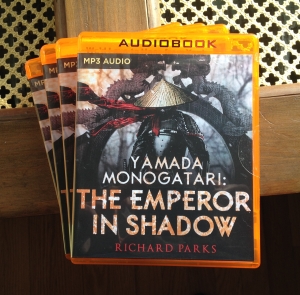 Surprise package in the mail last week, from my publisher’s agent—physical copies of the The Emperor in Shadow audiobook. Just the thing for those long drives in vehicles that still have those, what were they called? Oh, right. CD players. I’m sure there are a few around…other than mine.

I wonder if I should preface this next section with SPOILER ALERT, or some such, but for those who don’t know, The Emperor in Shadow is the concluding volume in the Yamada Monogatari series. I’m not going to say that I’ll never write another Yamada story, because I don’t know that (he also has another sister we still haven’t met), but the main story arc is completed, since the series always had an endpoint and my only uncertainty was if I’d get it there in a reasonable time frame. The answer turned out to be yes. The publisher plans an omnibus volume which will gather all the Yamada stories, plus three stories not yet collected, plus the three novels. That is likely not to be out until 2018. After that, well I plan to be doing something else. I hope some of you are willing to stick around for that. More details when there are any to share.