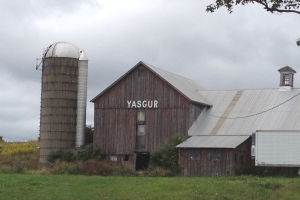 I’d heard of bucket lists most of my life but I never had one myself. That is, I thought of things I wanted to accomplish, but it was never of the formal “I have to do this before I die” bucket list. I’ve managed to accomplish most of my initial goals, but the blessing and curse of goals is that there’s always another one. Get one out of the way and you discover the goal posts have moved. Plus the one or two that have not been reached, as you consider them, realize that, yes, you still want that. I have a few like that, but all I can say on the subject is “I’m working on it” and try to make sure that’s true.

And then there are the things that ambush you. Things you want to do or achieve that you didn’t even realize were a “thing” at all. For instance, when I knew that I was leaving Mississippi—though not yet sure to where—there was suddenly a list of things I needed to do beforehand. I’d already been to Miss Eudora Welty’s stomping grounds in the Belhaven district of Jackson, and even shopped at the grocery store she frequented. I needed to visit Square Books in Oxford, MS, a place I’d meant to go for years but never managed to get there. Done. I needed to visit Rowan Oak, home of William Faulkner, also in Oxford, so that was a two-fer, What else? Well, there was the Choctaw Indian Fair at the Choctaw Reservation. I’d never been, so we packed up and went. Only to be blindsided by a bit of nostalgia as we went to an event held in the Choctaw High Gym and I remembered I’d been there before. I had run on that very track around the field where the stickball games were played, back in my HS days. Maybe that was why I needed to go. Something else to say goodbye to.

Regardless, we moved to central NY state and began the process of learning about our new home. We visited Cooperstown, but more for the Farmer’s Museum than the Baseball Hall of Fame. We went up to Old Forge and Lake George in the Adirondacks. We visited Woodstock almost by accident, since Carol wanted to go to a store in a nearby town and afterward we got a little lost. Cool place, and we’ll probably go back. Then we heard of a special event being held on Yasgur’s farm. Did a double take. THE Yasgur’s Farm? The very same. The place where the Woodstock Music & Art Fair was held way back in 1969. Something I hadn’t realized before then was that Woodstock wasn’t held in Woodstock, since the original site fell through. It was then moved to a farm in Bethel, NY, in the Catskills. Yasgur’s Farm, as in the song. So we went to a place I hadn’t realized I needed to go.

I still don’t have a bucket list, because I think the idea is silly and limiting. There’s always something new to do, an experience you didn’t know you needed. When the time comes, the thing reveals itself. Go for it. Not an admonishment, by the way. Just a reminder. To myself, if no one else.

P.S. The new “Story Time” should go up on Wednesday. I’m trying that as the schedule for now. What’s it going to be? Not telling.