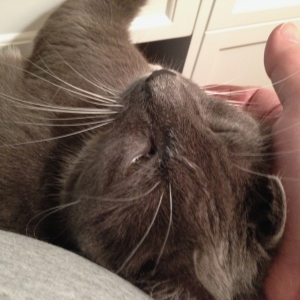 Incapussitated (n) The inability to do the thing because there’s a cat in your lap demanding all the attentions.

It’s not in the dictionary, but it should be.  Happens frequently here, but then there’s always an excuse not to do the thing, whatever it is.  Take this blog, for prime example. I didn’t write anything for twenty minutes because there was a cat on my lap. Now, technically I could have continued writing despite the constant pawing for attention, but I chose to respond to the demands of my fellow living creature. Who, it must be known, finally had enough and jumped down to go elsewhere. Incapussitated (alt. incapurritated) is always a temporary condition.

Blind, crippling self-doubt? Yeah, that one’s always around. Yes, of course it helps to know that you’ve done the thing before and very well and can surely do it again.

It never goes away. Not completely. In some ways it gets worse. When you’re first trying to do the thing, you don’t know you can’t do it. You don’t know that you can. That uncertainty actually works in your favor as a partial antidote to crippling self-doubt because you don’t know, and so neither does crippling self-doubt, and maybe you’re both a bit curious. So why does it get worse after you’ve actually done the thing? (Pausing to note here the obvious point that “the thing” can be anything from writing a novel to learning to play a musical instrument. It doesn’t much matter what the thing is because there’s always a new thing, and crippling self-doubt trying to ruin it for you.) I think it’s easier to argue with yourself that a skill was lost rather than never being gained. Sure, you did it once—pure luck—but I bet you can’t do it again. Or, sure you’ve done it a dozen times—obviously you’re played out now, just repeating yourself, best quit while you’re ahead, et many a cetera.

If there’s a cure I don’t know what it is, except just to do the thing anyway, one battle at a time.

Allowing for incapussitation, of course