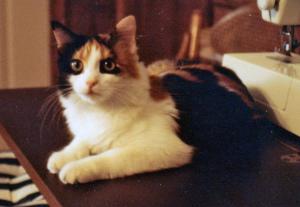 You’d think I’d be used to typing with a cat on my lap by now, but it does provide some complications. Like their tendency to flex their claws into my knee if I’m not petting them often enough. Which means, less typing. Could mean more thinking, if one takes the time to pet the cat long enough to generate a purr, sort of their version of the ‘Ohmmmm.” Good for meditative states, probably not so much for chasing down a theme.

If someone asks if I’m a dog or cat person, I’d have to say “yes.” I grew up with both, and have owned and loved several dogs over the years. But when First Reader and I married, our living situation was such that dogs were problematic. So we started with cats, and have more or less kept with them, save for the occasional beta fish. There was Early, the calico, so called because that’s when she wanted to play, and wake us up. She liked to sleep in my manuscript boxes. In the attic is a box of such boxes, and I have no doubt, if I opened a few and looked closely, I’d find a few Early hairs.

There was Cobweb, the Persian, who liked to eat the furniture. Fizzgig and Summer (pictured above), American Short and (Calico) Longhair, respectively. Fizzgig was probably as close to “normal” as any of them. Summer was a little nuts, even by cat standards. She was a rescue, as almost all of our cats were, save Cobweb. Summer hated men. I’m sure she had her reasons, but most of the time she was First Reader’s cat, and could barely stand to be in the same room as me. It was only in her later years, when I suspect she was getting a little dotty, that she warmed up to me at all. One day she even climbed into my lap. I had to call First Reader over to make sure I wasn’t hallucinating. “Are you seeing this??” By this time she was an only cat. This suited her fine, and we resolved not to change it until she passed on. She was our longest lived cat.

There was also Valentine and Cameo, both gone way too soon. Sweet cats, both.

Now it’s Sheffield and Sterling, two gray and white brothers who forget they are brothers half the time and get salty with each other. Or just play too rough, I guess it depends on how you look at it. I hope they’re with us a good while longer, despite the fact that they take turns crawling into my lap when I’m trying to write.

Mice parts on the rug? I could do without that. No matter. It’s just part of the gig.