This is from the cherry tree I planted last weekend. It seems to be liking its new home. 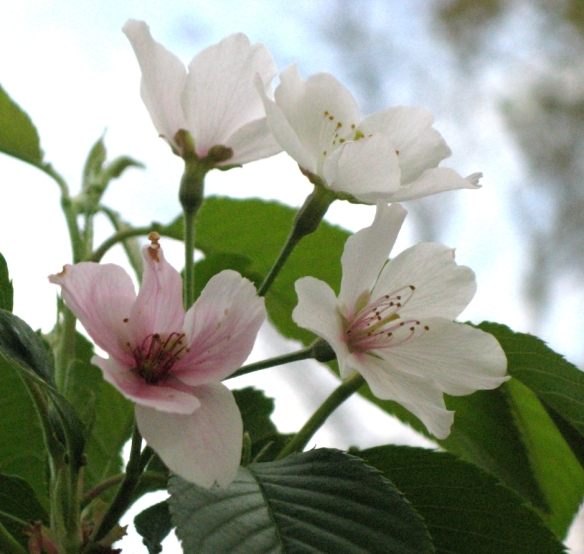 Earlier this year we had two Southern Pines  taken down near our property line. They were too close to the house and made a mess besides. So then we had this bare strip of dirt bordering our neighbors, which made Carol unhappy. This weekend we set about correcting this. The plan was simple in theory—replace the pines with a smaller tree and then fill in the border with shrubs. Only our plan didn’t really take into account the nature of the dirt in that spot. If you can call it dirt. Here we call it pure Yazoo Clay.

There were eight plantings all together. Three “Sky Pencil” hollies along the fence. One Japanese Maple on the border strip, with two Chinese Hollies on either side. I tried a shovel. Yazoo Clay laughs at shovels. There are rocks that aren’t as hard to dig as packed Yazoo Clay. It occurred to me that there was a reason there were two pine trees in that location—nothing else would grow there of its own free will. So I got out the mattock, and that worked a little better, even though the situation was complicated by the fact that, while the trees were gone, most of their root systems were still in place. I was having to take frequent rest breaks, which prompted Carol to suggest that “Maybe we should have done this when we were younger. And of course by ‘we’ I mean ‘you.'”  Ha. Ha. She so funny.

I managed three plantings on Saturday and the other five on Sunday. After about the twentieth pine root I’d chopped through, I took a good look at my mattock.

Next time, I’m renting a jack-hammer, but only because dynamite is illegal.