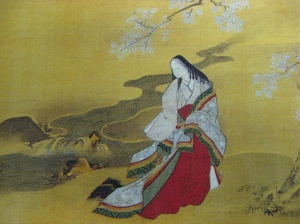 Reference books. We tend to accumulate them in the natural course of our writing projects, whatever they may be. After all, Google doesn’t have all the answers, and while any single citation should be taken with a grain of salt, the ones you find on the internet need something more along the lines of a 50 lb bag. A source of reliable information is to be treasured, and since I’m going to be packing them up soon (oh, they are SO going with me), I thought I’d mention a few. I’ll concentrate on those I’ve found especially useful for the Yamada series and why, since I’ve been asked about them so apparently some people are curious.

A History of Japan to 1334 by George Sansom. Invaluable for timelines, major events, and key persons during the latter 3rd of the Heian period, Yamada’s time.

The Diary of Lady Murasaki, by Lady Murasaki Shikibu. Author of Genji Monogatari, and an attendant of the Empress Shoshi in the early part of the 11th century. Views of everyday life and attitudes of the aristocrats of the Heian Imperial Court, by one who was there.

The Pillow Book by Sei Shonagon. For much the same reason as The Diary of Lady Murasaki. Diaries form an important record of the time, and were usually kept by Ladies of the Court. Sei Shonagon was a contemporary of Lady Mursaki, with a bit earthier style and interest. There is some evidence that they did not get along.

As I Crossed a Bridge of Dreams by Lady Sarashina. This one’s a little different. Lady Sarashina was also a contemporary of Sei Shonagon and Murasaki. She was born in the Capitol but relocated at the age of nine to an eastern province on the other side of what is today Tokyo when her father was appointed assistant governor. Four years later the family returns to Heian-Kyo (Kyoto). This book is mostly an account of that journey. A great source of attitudes, problems, reminders of the impermanence of life, and accounts of what travel was like in the period.

The Gossamer Years, translated by Edward Seidensticker. This one has a lot in common with most of the contemporary accounts above by being a nikki, or diary, written by a noblewoman of the time. But here’s the thing—we don’t even know the Lady’s name, just as we do not know Lady Mursaki’s or Sei Shonagon’s or Lady Sarashina’s “real” name as we use the term. These are how they came to be known—Lady Murasaki was given the nickname Murasaki from the character in Genji. “Shikibu” was a title, probably held by a male relative. Likewise “Sei Shonagon” is a title, not a name. Noblewomen of the time generally did not put their names on what they’d written, even if everyone knew who did, as with Genji Monogatari. For an aristocratic lady of the time it was considered scandalous to have people outside your circle know your personal name, so most of them are lost to time. The author of The Gossamer years is referred to as “the mother of Michitsuna” and we know that she was a Fujiwara. That’s pretty much it, so far as her name.

The Confessions of Lady Nijo, translated by Karen Brazell. Lady Nijo was a Lady of the Court and concubine of an emperor in the Kamakura period (1185-1333AD). A little after Yamada’s time, but Court life hadn’t changed that much even though the seat of power was now with the Minamoto Shoguns at Kamakura.

Palaces of Kyoto by Tadashi Ishikawa. Color plates of architecture, clothing, gardens, festivals, all much as Yamada would have seen them.

An Introduction to Japanese Court Poetry by Earl Miner. For obvious reasons. Poetry was extremely important to the Heian nobility, for coded communication, for courting, for enjoyment…a courtier who couldn’t turn out at least a passable poem on demand was considered unfortunate at best.

The Tale of the Heike (Heike Monogatari) by Helen Craig McCullough (translator). Translated from texts originally from oral accounts, it is the story of the fall from power and dissolution of the powerful Taira Clan, who once nearly destroyed the Minamoto and controlled Kyoto and the Emperor for many years. About a century after Yamada’s time, but this is where the Heian period ends, and where the social and organizational problems of the Heian period reach their conclusion. Kamakura will also become important to Yamada, as you’ll discover if/when you read Yamada Monogatari: The War God’s Son.

This isn’t everything of course. I have more collections of poetry, and books on Western and Chinese folklore, and fairytales, etc. But these are the main Yamada references at the moment. Repeat–at the moment. I keep adding new ones.

1 thought on “Do You Want Footnotes With That?”