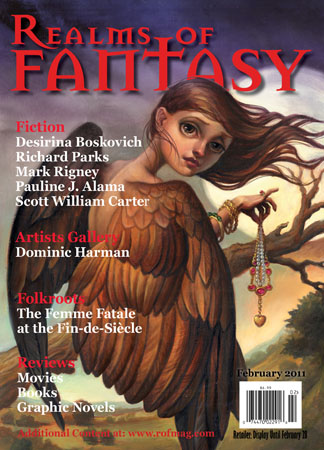 Today’s Story Time is “Courting the Lady Scythe,” which first appeared in Ekaterina Sedia’s anthology, Paper Cities: An Anthology of Urban Fantasy in 2008. The anthology won a World Fantasy Award for the editor in 2009.

This story is set in the same universe as A Warrior of Dreams. Like any decent universe, there’s more that goes on beyond what you see in the main storyline. There are legends and fables and cautionary tales, and this is one of those. Which one is something you’ll need to decide for yourself.

Standard Reminder: “Courting the Lady Scythe” will be online until next Wednesday, October 25th. After that, there will be something else in its place.

Now that all the t’s are dotted and eyes crossed, I can announce here that Audible.Com and Prime Books have signed a deal for audio editions of several books in the Prime Books catalogue, including works by Ekaterina Sedia, Rudy Rucker, and the first two Yamada Monogatari books, Demon Hunter and To Break the Demon Gate (due in out in December of this year).

So now there will be audiobook editions of both books in addition to the print and ebook editions. It’s possible that the third in the series, The War God’s Son, will also have an Audible edition, but that’s yet to be determined. The deal was negotiated by Jennifer Jackson for the Donald Maass Agency, and you can read their announcement here. Also, Prime now has pre-order information for To Break the Demon Gate at their site, so now you can select another vendor if you’re avoiding Amazon at the moment. It is, after all, not the only game in town.