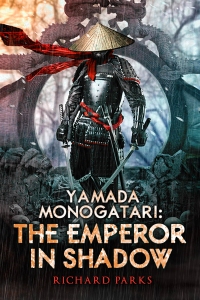 I have a quirk which my wife has often remarked upon. I have conversations in my head which I then forget to have in real life, yet will sometimes believe that I’ve done so. I’m so used to holding up two ends (or more) of an imaginary conversation and spinning scenarios that it’s not always easy to turn off. Unchecked, it can play havoc in a normal relationship, and I do try to keep it under control. Nevertheless, I’d never want to eliminate this quirk, because it is simply too useful a tool. What is dialogue except an imaginary conversation between two beings who do not exist, save on the screen or page?

You’re right—I’m not sure I understood that last bit myself, so let me try again, more concrete, less surreal. I finished the rough draft of Yamada Monogatari: The Emperor in Shadow on May 24th. First Reader was kind enough to push it up to the top of her queue because of the time crunch, and the last several days I’ve been working through the rewrite. In the book Yamada needed a crucial piece of information. I worked out a logical way for him to receive said information without alerting the wrong people, and I worked out the scene where it happens. I set the logic bomb in motion and wrote out what followed from this crucial scene to the end of the book.

How did I manage to do this? Beats me, fore the reason already mentioned. I did not discover this until the read through. There was a hole in the book, left there by me because I had envisioned the scene and its aftermath so clearly, so completely, that somewhere in the twisty lump I call a brain, I thought I’d already written the darn thing. Only I hadn’t. This took all of ten minutes to correct, since the scene was still in my head, down to the last detail, right where I had left it. It was like sentences where someone leaves out a word—or perhaps you do it yourself—in a succession of words which flow such that your brain fills in the missing word even though it is not there. Sometimes you never even notice.

Fortunately for me and the book, I did notice. Though if I hadn’t, I fully expected to hear about it from my editor at Prime—“How the hell does he know this??”

I spared us both the aggravation, but it was a close call.

The book is turned in, and assuming no major revisions are needed—or I didn’t leave anything else out–we should be on track for a September 2016 release. Now it is on to other imaginary conversations, which I hope I will at least remember to write down.