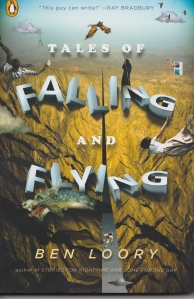 Tales of Falling and Flying by Ben Loory, Penguin Books, 2017

I picked up Tales of Falling and Flying on the recommendation of Jeffrey Ford. Since I’d also discovered the weird and wonderful Strange Tales From a Chinese Studio from the same source, I was more than inclined to give this one a try, and was definitely not disappointed, especially in the weird and wonderful department. Tales of Falling and Flying excels in both categories.

At first glance, this looks like a collection of short stories. Once you’re into it, that perception gets stretched a bit, or at least mine did. Not that the tales within ran roughshod over classic definitions of a short story. I mean, they were about something. They had a beginning, middle, and end in the sense that they started somewhere, went somewhere, ended somewhere. It’s those “somewheres” that need a bit of a mental adjustment.

Take for example, the very first piece in the book, “The Dodo.” I’m just going to quote the opening line: “Once there was a dodo, and he died with the rest, but then he suddenly got back up again.” So what does a dodo who should be dead but isn’t do? If you guessed “Get forced into an identity crisis because he’s alive but all the dodos are dead, therefore everyone says he can’t possibly be one,” then you have the idea. Or consider “The Sloth,” which features, yes, a sloth, one who decides he doesn’t really want to hang around the jungle eating leaves and decides to go to the city and get a job.  What sort of job is there for a sloth in the big city? It takes the sloth a while to find out, but the answer follows very reasonably from what the sloth discovers in his search along the way. Or “Death and the Lady” where a woman goes to church and discovers Death sitting next to her, and if you think you might know where that particular story is headed, you’re both right and very wrong. If I had to pick one, I’d likely say that was my favorite, which is silly because you don’t have to pick one. The very idea is limiting.

One thing I can confirm is that there will be tales of “falling and flying.” Along the way the reader could be forgiven for thinking she was reading a book of special kinds of stories called parables, deep into double meanings and lessons and metaphors and whatnot. But then you hit a story like “The Ostrich and the Aliens” which, in its own metafictional way, pokes fun at the very idea. So maybe they’re not parables, or perhaps they are, or some of them, and I found myself thinking about each one even while I was reading it. Normally that sort of thing kicks me right out of a story, but not in this case. The stories invite a bit of consideration. Invite? Say rather they demand it. As for classification, well, I can’t speak for other readers, but after a while I stopped worrying about that and just gladly went wherever Loory was going. Plenty of time later to think about where that was. No conclusions yet, but I’m still thinking.

Which is just about the highest compliment I have to give.