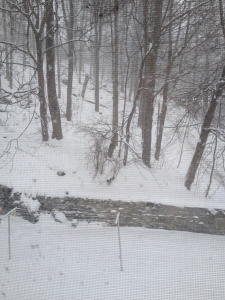 It’s a seasonal thing. I’m getting a later start on this blog because, well, it snowed last night. Not an unsual thing here in central NY state in February, but when it snows there’s snow, to state the obvious. Snow covering the path to the garage, snow covering the steps and sidewalk, snow covering the car and driveway. It has to be, as they say, “dealt with.” So I spent part of the morning shoveling and pushing snow from where it was to where it needed to be. Then a break for lunch and, now that the car and driveway were cleared, a trip to the store for supplies before the next round of snow hits. It’s sort of a recurring theme.

Another recurring theme this time of year is that it’s 1099 time, which means publishers that paid you for work last year send the proof. Not quite as good a reminder that you really are a writer as the original checks, but in the same vein. Considering that I only published two original stories last year* (not counting the originals that went up during Story Time) , it was a bit of surprise to discover that both “In Memory of Jianhong, Snake Devil” and “On the Road to the Hell of Hungry Ghosts,” published in Beneath Ceaseless Skies last year made the Locus Recommended Reading List in the short story category. That was a pleasant surprise. Not a huge deal but still a lot better than a poke in the eye.

More snow is predicted for tomorrow night. Best to make sure one knows where one’s shovel is.

* Edited to Add: Actually, there were three. The third was “The Cat of Five Virtues” in Tales of the Sunrise Lands. Amazing how much trouble I have keeping track.