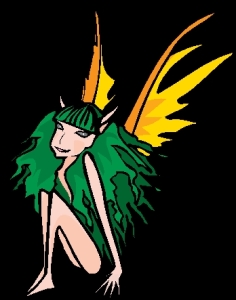 Muse: You’re not trying to pull that stunt again, are you?

Writer (looking affronted): Whatever do you mean?

Muse: I mean you have a piece of flash fiction due Wednesday. Your attention is elsewhere, and so you play off me to get your word count.

Writer: No, that would be clever. We both know I’m not clever.

Muse: No, but you are sneaky. It often passes for the same thing.

Writer: Let’s just say, for the sake of argument, that I was attempting to do so. You’re my Muse. Shouldn’t you help me?

Muse: That isn’t helping. It’s encouraging bad habits, and you already have enough.

Writer: Aren’t you even curious?

Muse: And you need me for that?

Writer: I would appreciate your help, yes.

Muse: You’re a lower middle-class kid from Mississippi. You spent half of  your early summers barefoot. The bottom of your feet were so tough, you could run barefoot over a stubble patch and not even notice. And  you need my help for this?

Writer: Well, I admit the word works pretty well as an image, such as the one you supplied above. But you have to admit, as a theme it’s somewhat lacking.

Muse: You’re talking 500 words. You barely have time for a decent scene, never mind a theme.

Writer: But all stories have a theme, and I don’t do vignettes.

Muse: So fine, you were a kid from the Bible belt who avoids anything to do with Bibles. I’ve met vampires more in touch with their spiritual side. Tie that in with barefoot.

Muse: Also nonsense.  You write fiction, remember? And by the way, neither are muses. Real, that is.

Writer: You show up here a lot for someone who isn’t real. And the idea of a muse has been around for centuries. That makes it real, in a sense.

Muse: By that logic vampires deserve the same courtesy. By the way, have you ever heard of the Leanan-sidhe?

Muse: It should. You wrote a story about one, years ago. It’s a type of fairy muse who inspires writers and poets with inspiration so fierce they burn out and die young. Count yourself lucky you got me instead. Not real? At this point I’m as real as you are.

Writer: That’s not saying much.  I’m something of an artificial construction myself, or at least I feel like one.

Muse: Of course you are. You tell stories about yourself in order to understand yourself. And so does everyone else with more self-awareness than an amoeba. You’re all artificial constructions. The only difference is sometimes you get paid for it. And you think muses and vampires aren’t real? Talk about a mythological creature….

Writer: We’re digressing here; I’ll edit it out later. Let’s get back to barefoot.

Muse: You get back to barefoot. I’m done now.

Writer: Nope. WE did.

Muse (string of expletives deleted): You….