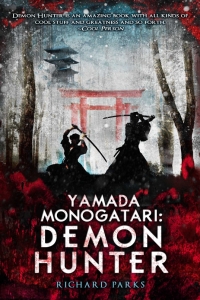 All right. The new Yamada story is completed, beta- read, revised, and sent out into the world. Working title is “A Minor Exorcism” and it runs just under 5000 words.  I’ll post when I know where or if it’s going to be published before it winds up in the new collection.

Which I now think will happen, if not anytime immediate. I’ve been going over the list of uncollected Yamada stories, and they shake out like this:

Clearly, not quite enough for a proper collection. I’ve got at least one more in mind, after that we’ll see. The first collection, Demon Hunter, contained ten, and I’d like to match that. If the delay is too long, I’ll do a short collection of six. I’ll also likely divide the stories into two sections, those occurring before the events in The Emperor in Shadow , and those following. Yamada’s life has changed, and the stories reflect that.

I’ll also likely have more than one mock-up of the eventual cover. Maybe I’ll post those here when I have them and ask for feedback. Some of you out there have been reading Yamada from the beginning, so you should have at least some input. Fair?

Time to get back to work.

4 thoughts on “Not Quite as Slow”