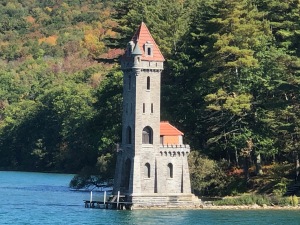 First Reader and I had been meaning to take one of the boat excursions on Lake Otsego in Cooperstown, NY, for some time now. Summer was pretty much impossible because, oddly enough, the place is overrun with baseball fans come to see the museum and looking for other things to do. Go figure. Now the kids are back in school, at least some of the grown-ups are back at work, and the place is not so crazy. Also, it’s fall now and the leaves, as you can see, are starting to change. And since the boat tours close for the season in a couple weeks, we decided not to wait.

By the time the captain had finished relating the long list of previous lake boats that had either burned or sunk or both, I was maybe having second thoughts about that “not waiting” thing, but as we were well under way it was too late by that point. Still, the current boat is all metal so I was less concerned about the burning part, figuring we stood at least a 50-50 chance.

This is Kingfisher tower. Built by a guy named Clarke around 1876, it’s a sixty-foot folly (in the technical architectural sense) in order to make the lake more “aesthetically pleasing.” Locals wanted it torn down, but overall I’m glad they didn’t.

While I do think it’s a cute building, it’s hard to imagine this as anything other than gilding the lily. Lake Otsego is gorgeous all by itself, and it was probably more so in 1876, before alewives (the fish) were introduced by accident and upset the natural balance. The lovely blue cast to the water, which you can probably make out in the picture, is due to a slight over-abundance of blue-green algae. Alewives ate the plankton which normally fed on the algae, which led…well, you get the idea. The lake water was a lot clearer before that happened. Still gorgeous, but yeah. Alewives are threatened species in some lakes, but in Lake Otsego? Not so much.

Lake Otsego is a glacial lake, nestled into a wooded valley. It is just over 7 miles long and is 167 feet deep at its deepest point. The outlet from Lake Otsego forms the North Branch of the headwaters of  the Susquehanna River, which eventually ends up in Chesapeake Bay. Never let it be said this blog is without educational content.

In non-lake news, I’ve started the rewrite of the unrelated (to Yamada or really anything else) novella. I have a working title, but it’s likely not going to stand, so I’m not giving it here. When I know what the actual title is, I’ll post it.