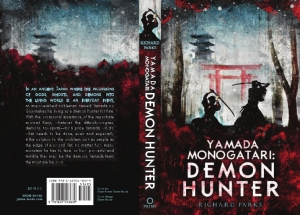 I’m breaking my relatively normal late week silence to announce that Scott Andrews at Beneath Ceaseless Skies Magazine is giving away two (2) signed copies of Yamada Monogatari: Demon Hunter. I’ve only signed three copies total and Scott’s giving away two of them. All you have to do for a chance to win the first copy is leave a comment on the Contest Page listing the title of your favorite Lord Yamada story, and why that’s your favorite. Scott has helpfully given links to all the Yamada stories that have appeared in BCS, so if you haven’t read any of them, you can correct that immediately for your chance to win. The second giveaway will be through a contest on Twitter. I’ll give details when there are any, but the first one will probably be the easiest to get in on.

Contest aside, BCS has rapidly become the premier venue for literate adventure fantasy, so if that’s your cup of tea, you’ll find a neverending pot brewing there. Check it out.

Okay, so it’s more of a self-serving announcement. Maybe we need a new desgination for that. Maybe SSA? Anyway, here’s the deal–Scott Andrews at Beneath Ceaseless Skies has just released The Best of BCS, Year 3. Here’s the ToC:

It includes “Walls of Paper, Soft as Skin” by Adam Callaway, named to Year’s Best Dark Fantasy & Horror 2012, edited by Paula Guran, as well as three stories named to the Million Writers Award Notable Stories of 2011 and four given Honorable Mention in Year’s Best Science Fiction 29, edited by Gardner Dozois.”

You can also pick it up at all the usual places, Amazon, B&N, Smashwords…..here’s the thing–proceeds from the sale of The Best of BCS, Year Three go to pay BCS authors and artists for their work and keep the magazine going. Two subjects near and dear to my heart, it has to be understood.

Okay, commercial over. Thanks for your patience.