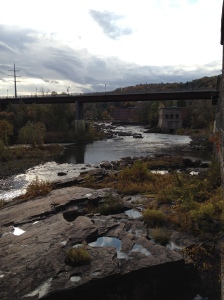 Up at 4AM to take Carol to the airport for an early flight. She’s attending a workshop down in Florida, so I’m on my own—save for Da Boyz—for the next few days. On the way back I could see several large V-formations of Canada Geese heading south as well. I won’t be. The first real snow of the season is on its way tonight. I have my studded snow tires, my snow shovels, my salt. I’m as ready, I guess, as I’m going to be.

I’m still astonished at the number of crows that call the Mohawk Valley home. On the return drive I passed a flock that I swear stretched out at least half a mile. I’ve never seen so many crows in one place before in my life.

One casualty of the dead hard drive and missing backup is that the completed manuscript for Power’s Shadow is gone. Poof. Fortunately I do have the ebook edition, but this will delay the print book for quite a while. I’m behind on The Emperor in Shadow for obvious reasons, so it has to take priority for the next few months. I still hope to see a print edition of PS, but don’t ask me when because I have no earthly idea.

On the plus side, I’ve shifted enough boxes to reach the other wall of my new office, so that’s something like progress. I have plans for wall to wall bookshelves. A man can dream.