Normally I like to get these blog posts out earlier in the day, but we had a nice, crisp late-summer morning here (what a concept!) and decided to go looking for a nature trail we’d heard about. We had a beautiful drive in the area around Mt. Shumaker, but a bridge under repair blocked us from reaching the nature trail. We’ll likely be back as summer turns to fall. The view from the mountain would be spectacular.

Okay, back to business, at least for a bit. A reader had already told me that the Audible.com edition of Yamada Monogatari: The Emperor in Shadow was available for pre-order and this morning I got the official link.  I was fortunate in that the audio book reader is once again the incredible Brian Nishii:

“Brian Nishii is a bicultural, bilingual performer from Tokyo. As an actor and dancer, he has worked with theatre companies such as La Mama’s Great Jones Company, Robert Wilson, In Mixed Company, Fluid Motion, Crossing Jamaica Avenue, and The South Wing. Film and television credits include Robot Stories, Sex and the City, and Law & Order (CI). He also provides lead vocals and antics for the colorful band, HappyFunSmile. He currently lives in Los Angeles with his wife and baby boy.”

While it is not quite yet the official release date where you’ll be able to find the book in your local B&N, Amazon.com does have paper copies for sale, so if you know you want it (And why wouldn’t you?) it’s there now. I also want to mention that I have paper copies of my own and since I’m unlikely to be anywhere you are, if you want a signed copy you can get it directly from me. My contact email is on the “About” page. While Supplies Last. END_OF_DOCUMENT_TOKEN_TO_BE_REPLACED 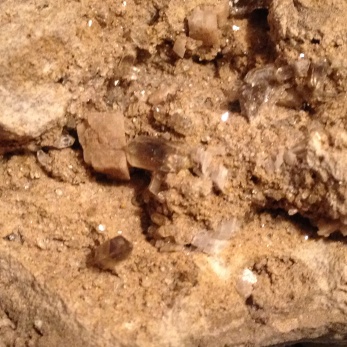 We spent most of yesterday at a Gem & Mineral Show just outside of Syracuse. Carol uses stones in her work and I’m just interested. Sometimes I think I might have turned into a rock hound if I hadn’t been born and raised in Mississippi. Some people managed it anyway, but I was never clear on how, since the place I grew up was just a small section of what was, for most of its geological history, a shallow inland sea. Dirt, I knew. Rocks? Not so much. I am reliably informed that there are rocks there, and you’d occasionally see evidence of it when the highway department had to cut through a hill to make a road, but outside of a few river pebbles and the odd chunk of exposed limestone, it was rare. I had to content myself with searching for fossils within road gravel, but seldom found anything other than fish vertebrae and sections of crinoids, which no one would believe were fossils because, you know, road gravel. I find it just a little bit ironic that now I live on the side of an ancient—really ancient, as in some of the oldest rocks on earth are less than a mile from my house—river gorge. There are more natural, native stones in our several retaining walls than I ever saw growing up. Go figure.

Received an email last week that Yamada Monogatari: The Emperor in Shadow

is already going into production at Audible.com. That didn’t take long, considering they’d only had the manuscript for a few days. It’s likely—and hoped—that Brian Nishii will be doing the narration again. It’s possible that the audiobook edition will be available right around the same time as the print and ebook editions. Also, I may be doing a local signing for the book come publication day. Details are yet to be worked out, but I’ll post them here when/if they are.

I just got the news that Audible.com has made an offer for the third Yamada Book, The War God’s Son, so there will be an audiobook edition of this one as well. Word is they want the fourth one too, only there’s the slight technicality that it isn’t written yet.

I hope they’re able to get Brian Nishii to do the narration again, but that’s something to be determined later. In the meantime the third book actually is written, turned in, and scheduled for release in October of this year from Prime Books.

“With the Abe clan and its allies in full rebellion, the Emperor’s greatest military leader, Minamoto Yoshiie, is targeted for assassination by magic. It is up to the newly sober Lord Yamada and his exorcist associate Kenji to keep the young man alive long enough to put down the uprising before the entire country is consumed by war. Yamada knows how to deal with demons, monsters, and angry ghosts, but the greatest threat of all is one final assassin, hidden in a place where no one—especially Lord Yamada—would ever think to look.”

Now that the paper edition of Yamada Monogatari: To Break the Demon Gate is in the wild, the Audible.com edition narrated by the incredible Brian Nishii will be relased on December 3rd, so for those of you who like listening to books when you’re busy with activities that don’t leave your hands free (Like driving. What did you think I meant?), this is for you.