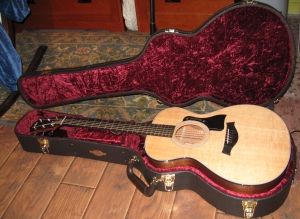 In general I’m not a big fan of surprises, as they’re more likely to be nasty than nice in my experience. But every now and then…. On Saturday I was doing some of the finishing work on our hall bath (long story, and even longer process). Carol had gotten out of the house rather than strangle a contractor, and when she returned that afternoon she had a surprise for me.

That’s it in the picture. A Taylor 312e Grand Concert. I did have a decent acoustic but I’d realized the size wasn’t a good fit for me and I was looking with lustful eyes at a used Martin Custom and a Taylor Mini GS, but the Martin had sold and it was out of my price range anyway. The Taylors I’d tried had a bright, chiming tone that appealed to me as much or more than the warmer Martins. I had some writing money coming so I was thinking of the Mini GS, but then my darling wife beat me to the punch with this beauty, which is a few steps further up the line and cost over twice what the Mini GS would have. I had to ask her why, and she just said, paraphrase, “You settle too often. You deserve a good guitar.” Not really, not yet. I don’t deserve her, either. Life isn’t fair, and as often as not that’s a good thing.

In the category of Not a Surprise, To Break the Demon Gate has been pushed back to May. Of course, I only know this because of the Forthcoming  Books section of Locus Magazine. What? You don’t think they tell the writers these things, do you? Silly people.

Also in the NAS (not a surprise, or at least not to me) category, I’ve sold another—and at the moment, only—Yamada story to Beneath Ceaseless Skies. The only odd thing about that was this story had already sold to Weird Tales for their fairy-tale issue a couple of years ago, then became unsold. This doesn’t happen very often, and usually because the venue in question has died (lost one, for example, when Realms of Fantasy ended). Not this time, and in a circumstance I hope never repeats. Regardless, I’m glad I found a new home for it. It’ll probably be published this year, but maybe not until fall.

I need to write a movie review of a very odd Japanese fantasy flick. Maybe next time. If my fingers ever recover from practicing barre chords.