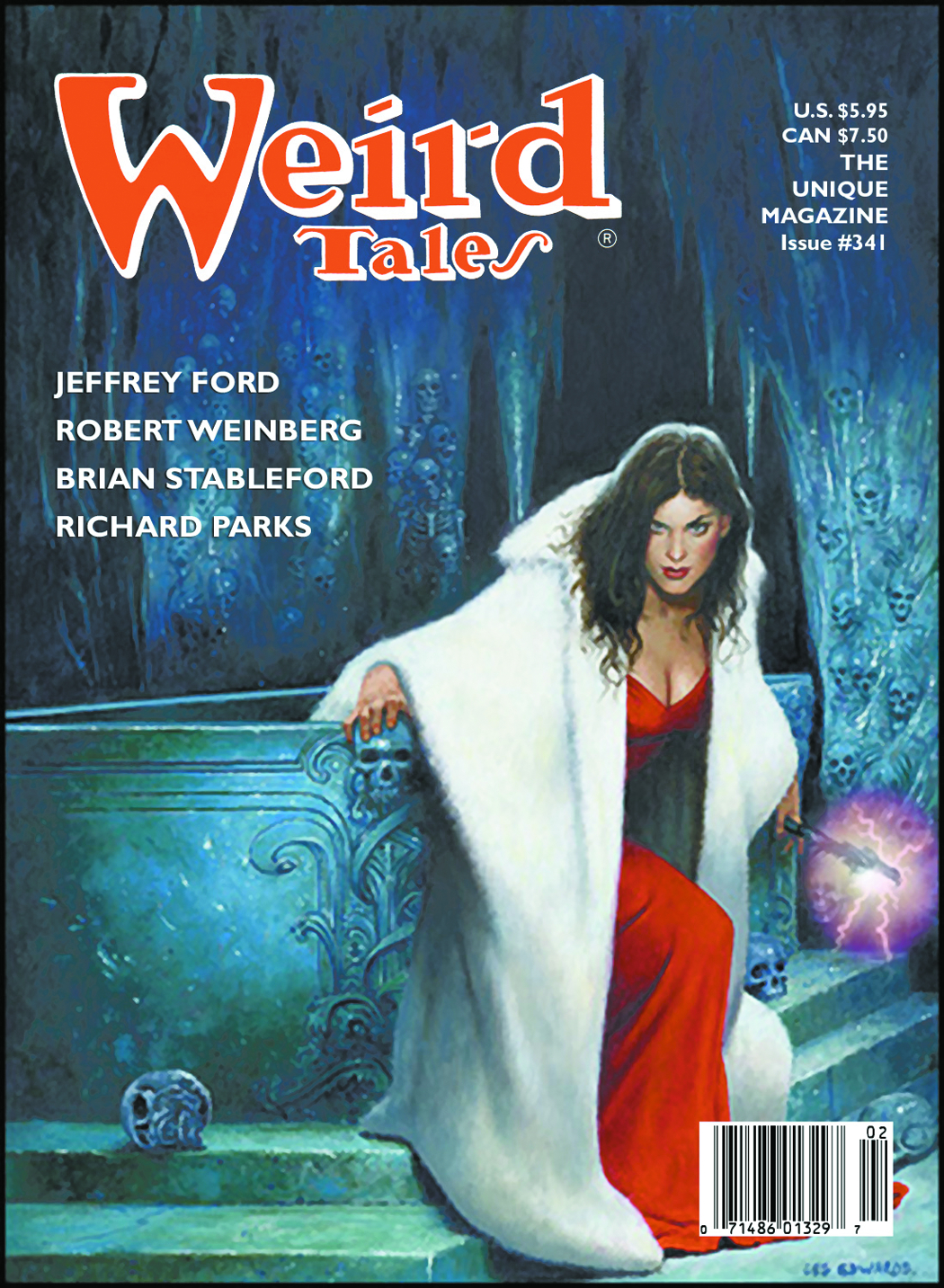 Today’s Story Time, “A Place to Begin,”  was originally published in Weird Tales, back in 2001 when George H. Scithers and Darrell Schweitzer were editing. I published three stories with them and I remember that period in the magazine’s history fondly (even if they were a bit slow in response times).

Edited to Add: Story Time updates and the story listed here likely won’t be there if you’re reading an older post.

Right at this moment I’m beginning to wonder if this blog post is going to get written today, or if it is, posted. Suffering from a wonky internet connection. We—okay, I—have gotten so dependent on this ephemeral flow of electrons that I now find it hard, creation-wise, to function without them.

Case in point, the illustration to the left. That is Skelos #1, a new magazine of dark and weird fiction from Skelos Press. I ordered a copy when I first heard about it, and I admit this was mostly from nostalgia. See, when I was first entering the field, there were no online magazines like Lightspeed or Beneath Ceaseless Skies. In fact, there was no “online.” There were personal computers of various sorts, and something called a BBS, which was basically a bunch of users clinging to one central computer via analog modem. Yes, I am THAT old. Regardless, magazines like Skelos were almost the only game in town if you wanted to write and sell(?) fantasy fiction. Pro level magazines did pop up from time to time. Most didn’t last long. Pro magazines like Weird Tales or Fantasy & Science Fiction were the exceptions, not the rule. There were a lot more pure SF magazines around, but they wouldn’t touch a fantasy story with a ten-foot cattle prod. So it was the amateur and semi-pro magazines that filled the gap. Most were shoestring affairs, everything from perfect bound presentation pieces to saddle-stitched fanzine level crap, published only as long as the creator’s energy and money held out. Names like Copper Toadstool, Fantasy Macabre, Whispers, Weirdbook, Space & Time. Some of those names you may know, since Weirdbook and Space & Time have resurfaced in new incarnations. I would have included Weird Tales in that, but it has apparently died yet again. END_OF_DOCUMENT_TOKEN_TO_BE_REPLACED

Some thoughts triggered by the Nightshade Books edition of the collected letters/correspondence between H.P. Lovecraft and Donald Wandrei, and something aside from HPL’s questionable attitudes for the moment. Rather, this is about something we share as writers.  Now, it’s true that modern sf/f/mystery writers sometimes lament the passing of the old “glory days” of the pulps. We imagine a sort of golden age when people read instead of playing video games or zoning in front of the television, and there were literally hundreds of potential markets. We conjure by those ancient tomes: Weird Tales, Argosy, Amazing Stories, Black Cat, et many a cetera. While the pay wasn’t great except in the slicks, a person with a good work ethic could make a decent living writing short stories and novel serials and little else. And, I admit it, I’ve been guilty of looking backward with rose-tinted glasses myself, even though I know making that living required soul-crushing hackdom and turning out product by the ream. It’s nostalgia for a time I never knew and thus tends to ignore all the horrific truths of living in that time; it’s not supposed to be accurate.

Still, sometimes a little reality is a good thing, and while reading these letters now the thing that strikes me most–at least so far as it concerns the writing life–is how little short story publishing has really changed since 1927. Back then they were wondering why the editor bought this story instead of that one, bemoaning the absence of editorial judgment, bitching about late payments and the lack of good markets, and wondering if that last rejected story really did get all the way to the editor or was bounced by some nameless and clueless summer intern. Heck, I see the same conversation on writers forums every week. If anything is different it’s the ease and ubiquity of self-publishing, and the fact that doing it yourself sometimes even makes sense. Not always, no, but sometimes.  Yet back then there were likewise arguments for it, but it was a lot harder to do and a great deal more expensive. So in that way, perhaps, things really have changed. Everything else? Not so much.

In general I’m not a big fan of surprises, as they’re more likely to be nasty than nice in my experience. But every now and then…. On Saturday I was doing some of the finishing work on our hall bath (long story, and even longer process). Carol had gotten out of the house rather than strangle a contractor, and when she returned that afternoon she had a surprise for me.

That’s it in the picture. A Taylor 312e Grand Concert. I did have a decent acoustic but I’d realized the size wasn’t a good fit for me and I was looking with lustful eyes at a used Martin Custom and a Taylor Mini GS, but the Martin had sold and it was out of my price range anyway. The Taylors I’d tried had a bright, chiming tone that appealed to me as much or more than the warmer Martins. I had some writing money coming so I was thinking of the Mini GS, but then my darling wife beat me to the punch with this beauty, which is a few steps further up the line and cost over twice what the Mini GS would have. I had to ask her why, and she just said, paraphrase, “You settle too often. You deserve a good guitar.” Not really, not yet. I don’t deserve her, either. Life isn’t fair, and as often as not that’s a good thing.

In the category of Not a Surprise, To Break the Demon Gate has been pushed back to May. Of course, I only know this because of the Forthcoming  Books section of Locus Magazine. What? You don’t think they tell the writers these things, do you? Silly people.

Also in the NAS (not a surprise, or at least not to me) category, I’ve sold another—and at the moment, only—Yamada story to Beneath Ceaseless Skies. The only odd thing about that was this story had already sold to Weird Tales for their fairy-tale issue a couple of years ago, then became unsold. This doesn’t happen very often, and usually because the venue in question has died (lost one, for example, when Realms of Fantasy ended). Not this time, and in a circumstance I hope never repeats. Regardless, I’m glad I found a new home for it. It’ll probably be published this year, but maybe not until fall.

I need to write a movie review of a very odd Japanese fantasy flick. Maybe next time. If my fingers ever recover from practicing barre chords.